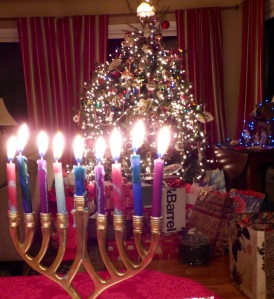 On this special day, I’d like to give you the gift of a story from my book, Meant-to-Be Moments: Discovering What We are Called to Do and Be. In this true story, a caring woman, Cathy Svacina, heeded an intuitive prompting she didn’t understand and ended up helping a desperate mother find the perfect Christmas gift for her young daughter:

We never know when the chance to show love to another person will present itself, but when we open our hearts to the possibilities, the opportunities are there, especially after we ask for them. That was true for Cathy, “the Marble Lady,” who helped a distressed mother find the perfect last- minute Christmas gift for her daughter. Here’s her story:

I was a stay-at-home mother of five facing an upcoming divorce. Without a completed college degree, I scraped by financially by waitressing, housecleaning, and doing childcare. However, I was still trying to set an example of community service for my children, so I was doing presentations about marble play at schools free of charge. I also was researching and working on a simple little booklet to help preserve the wholesome, traditional game of marbles. Having put aside my quarters from my waitressing tips for over a year, I finally was able to self-publish my small booklet, Knuckles Down: A Fun Guide to Marble Play. I could afford to print only one thousand copies, but I planned to donate

many of them to grade-school libraries and historical societies because at the time, you couldn’t find marbles at stores anymore, and there was very little information available in research materials about them. Quite literally, Americans were about to lose their marbles!

One day, just as I was backing out of the drive- way to go to work, the UPS truck turned in and delivered my first box of the marble books. I was in a rush, so I threw them in the trunk of my car and went on to the restaurant. That night I had a table of twelve people from all over the United States. They were a lively group! I asked them what brought them all together and they said I wouldn’t believe them if they told me. “I’ve got five children,” I said. “Try me!” They said they were there for a marbles auction! When I told them I had just writ- ten a book on marbles, I saw two of the men wink at each other as if they didn’t believe me and thought I was just going for a bigger tip. I took their orders, then ran out the back door to my car and grabbed a book from the box in the trunk. I served them their drinks along with a copy of my book. The women in the group cheered and the members of the Marble Collectors Society of America bought two hundred and fifty of my books that night! They also invited me to speak at their upcoming Boston convention.

It was meant to be. My books arrived just as I was heading to work, where I waitressed just one night a week. My serving section was swamped,

but the boss asked me to take on the big group from another section, saying that if anyone could handle them, I could. They weren’t staying at our hotel and had come to our restaurant because they were tired of the food at their hotel down the street. And that night was only the beginning. Several marble miracles have occurred that continue to answer my prayers many times over.

One of those miracles happened while I was alone organizing marbles in my marble room. I plainly heard a voice direct me to put together a beautiful bag of marbles. I looked up to see who spoke to me but no one was there. Nevertheless, the voice had been so clear that I got my finest draw- string velvet bag with embroidered flowers on it and filled it with beautiful marbles. I carried that bag around for the next three or four days, not knowing why. Then, just three days before Christmas, a meeting at church was cancelled due to a child’s illness. Since I had some extra time before my next meeting, I went across the street to the Dollar Store to look for last-minute Christmas items.

While I was in line waiting to pay for my things, a woman came rushing into the store and asked the clerk where their marbles were. He apologetically told her they had no marbles. She insisted they must have some marbles and again he apol- ogized and told her they had none. At that point, she started to cry. I tapped her on the shoulder and said, “Ma’am, I have some marbles you can have.”

Between her sobs she asked who I was. As I took the bag from my purse I told her, “I’m the Marble Lady!” Seeing the marbles, she sobbed even harder and asked for my email so she could explain later because she had to rush off right then.

That night I received an email from her:

My little girl, Michaela, is our adopted daughter. We just finalized her adoption on the fourth of November. While in foster care, she experienced horrendous physical, sexual, and mental abuse no one should ever experience, let alone a three-year-old child. Michaela came to live with us at age three and a half, and is now five years old. She has made tremendous progress and continues to progress and heal daily. She is pure, non- materialistic, and she loves the Lord.

For the last week, I have been looking all over town for marbles for her. That’s all she wants for Christmas— just marbles! I looked everywhere, but I couldn’t find them anywhere. I was very upset. The night before I saw you, I prayed that the dear Lord would help me find marbles for my little girl. The next day, something told me to go to the Dollar Store, and you know the rest of the story. Now, how many times have you been in line at the Dollar Store needing marbles, and the lady behind you happens to have a bag of them in her purse? This was Divine intervention and you were an angel for my daughter this Christmas. I can’t thank you enough!”

I keep her email in my journal, and ever since I received it, I ask God in my daily morning prayer to help me tune in to anyone nearby that might need my help! That prayer has been answered over and over; I have learned not to question that still, small voice when it speaks to me! And, I’ve stayed connected with Michaela’s mom, who says that she still plays with her marbles. I will be sending Michaela a very special bag this Christmas!